Sleep Apnea and Your Mental Health 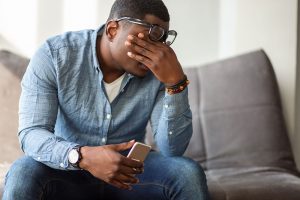 Researchers are also discovering a strong connection between sleep apnea and a number of mental health issues. In fact, depression, anxiety disorders, PTSD, schizophrenia, and bipolar disorder have all been linked to sleep apnea.

Getting the Right Diagnosis

Symptoms of sleep apnea include heavy snoring as well as feeling fatigued and irritable during the day. If you notice these symptoms in yourself or someone close to you, contact Dr. Steve Greenman at 805-601-8277 right away. We’ll make sure you recieve the correct diagnosis and the treatment you need.

The quality of sleep that a patient gets is closely related to your mental health. In fact, major psychological assessments such as the Beck Depression Inventory (BDI), the Profile of Mood States(POMS), and the Minnesota Multiphase Personality Inventory (MMPI) all contain questions about the the patient’s sleep patterns.

Patients who suffer from psychological disorders may not realize that they also have sleep apnea because the symptoms are often similar. When a patient is experiencing sleep apnea in addition to a mental health issue, it can exasperate both conditions. This phenomenon is known as comorbidity.

Sleep apnea is often comorbid with the following psychological issues:

In many cases, sleep apnea “may be causing or contributing to your depression.” That’s why it’s crucial to get the right diagnosis for your sleep disorder.

Anxiety Disorders and PTSD — According to Harvard Health Publishing, people with anxiety disorders are extremely likely to report some type of sleep disorder. This issue is often acute for veterans who suffer from PTSD. Sleep apnea, in particular, “is highly prevalent among combat veterans who have PTSD and complain of being overly vigilant at night.”